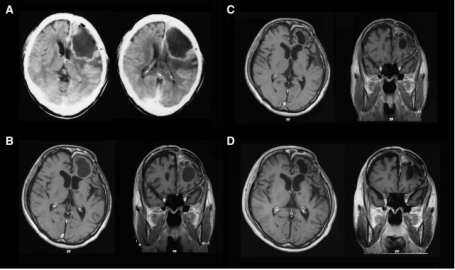 A 39-year-old man had received boron neutron capture therapy (BNCT) for a grade II astrocytoma (compatible with diffuse astrocytoma, not otherwise specified in the WHO 2016 criteria). He returned to his previous work after surgery, but, 7 years later, he suddenly developed seizures, and his health condition deteriorated.

Therefore, he underwent a second surgery. The mass removed in the second operation was mostly necrotic as a result of previous radiation treatment. He then showed no signs of recurrence and did not require any treatment other than antiepileptic drugs for 25 years. He was able to be employed by a listed company until the age of 65 years for light jobs as a physically handicapped individual. This case suggests the effectiveness of BNCT even for rather low-grade astrocytomas.